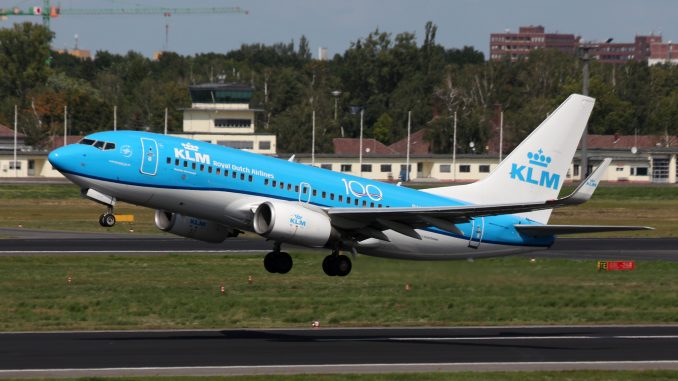 An aircraft operated by Air-France KLM on Thursday arrived at the Murtala Muhammed International Airport, Lagos to evacuate some European nationals from Nigeria.

It was gathered that the flight, which also left the same day, got special approval from the Ministry of Aviation for the exercise.

The management of the Murtala Muhammed International Airport, Lagos, through its Twitter handle @LOSairport, had on Thursday afternoon tweeted that there would be a special repatriation flight and that the aircraft would come in from Cotonou, Benin Republic, for the operation.

A letter of approval from the ministry dated March 26 and obtained by The PUNCH, showed that there would be similar flights on April 2 and April 9, 2020.

The ministry however ordered the airline to operate strictly based on the protocol guiding such operations under COVID-19.

It was gathered that the pilot and crew were not allowed to disembark and that after facilitation, the nationals were escorted to the aircraft to board.

In an emailed response to our correspondent’s enquiries, Air France said, “Due to COVID-19, Air France is doing all it can to ensure French and European nationals currently abroad can return home.

“Air France teams all over the world are fully mobilized and are doing all they can to assist French and European nationals at this difficult time. Air France is working together with the French and international authorities to adapt its flight schedule in real time in line with the evolving situation and the new restrictions imposed on airlines.”

The General Manager, Public Relations of the Nigerian Civil Aviation Authority, Sam Adurogboye, said the flight was captured under essential operations which could only be approved by the minister.

“We are in a period of emergency and in section 36 of Nigerian Civil Aviation Act, the minister has power to approve or clear flights in emergency. the NCAA will then process the clearance after the approval.”

The NCAA had last week issued a circular that all international airports should remain closed to international flights till further notice.

Exemptions were however made for humanitarian, medical relief, cargo, technical and safety flight operations.

The airline said on Thursday that the suspension would begin by midnight on Friday.

“Recognising the serious implications of the spread of the coronavirus around the country, the management of Ibom Air hereby announces the suspension of all our scheduled flight services as of midnight on Friday 27 March. 2020,” the airline said.

The airline said it would remain in a state of preparedness to restart full operations as soon as the pandemic was brought under effective control.