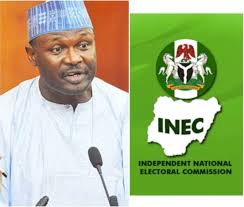 The headquarters of the Independent National Electoral Commission (INEC) in Abuja on Friday, April 17, 2020, was razed by fire.

This was disclosed to the press by the INEC’s National Commissioner in charge of Information and Voter Education, Mr Festus Okoye.  NAIRAMTERICS reports.

Okoye pointed out that the fire outbreak affected a section of the building that had the Department of Electoral and Party Monitoring and was as a result of electrical faults at the office of the Director of the department.

Going further, the INEC National Commissioner said that though some documents relating to political parties were burnt, the important ones were stored in fireproof cabinets.

In his statement, he said, “The fire started around 11 am, it was at the Media Centre outside the INEC Headquarters, the Headquarters is intact, there is no cause for alarm. The main documents relating to our monitoring of political parties are still intact, they have been moved out before the fire. What you have are just correspondences. But we have lost public properties and our working equipment. We are still trying to find out what happened’’

However, the fire has been brought under control by men of the Federal Capital Territory (FCT) Fire Service as confirmed by the Controller, Braimoh Mommoh.

He said that the men of the command ensured that the level of damage was minimal.

This latest fire incident has added to the number of public properties that have been gutted by fire in the last week. It could be recalled that both the headquarters of the Corporate Affairs Commission (CAC) and the office of the Accountant General of the Federation have all reported fire incidents.