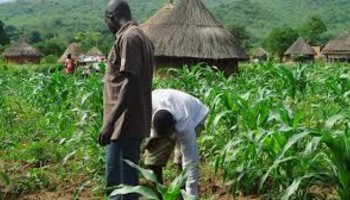 There are various means in which people can do business in Nigeria, across the thirty-sic states of the federation lies abundant natural and mineral resources coupled with the arrays of human resources. Among these numerous means is Agricultural Investment in Nigeria

Agricultural investment holds a major key to unlocking immense wealth for people in Nigeria; it is a sector that offers a great chance for people to steadily meet the needs of not only themselves, but also that of their respective community, the nation at large and the world in general. Food water and clothing which are considered one of the major needs of humans spins around Agriculture. It is no rocket science, immense wealth creation lies with investing in agriculture and this is because it is a sector that enjoys a daily demand of materials from both the local industries and international industries. Many these days believe that High Paying IT jobs are the new deal within the Nigerian system, while others believe that Oil exploration in Nigeria is the new gold. While we can deny this fact, however we cannot also overlook the importance of agriculture in the growth and sustenance of the world economy.

I bet many are still thinking that Agriculture is all about farming which many now consider to be outdated and that it has no place within the Nigerian set-up again, the new crop of generation now resort to believing that any agricultural process is a long tedious process with little or no profit and will instead churn out a larger percentage of their time on searching for jobs in Nigeria knowing fully well that there are limited job opportunities in Nigeria. There is a great prospect in investing in Agriculture in Nigeria. While consumers may see trouble ahead in rising food prices, but investors sees opportunity. The soaring world population and the rising middle-class affluence in countries such as China and India are fueling a growing demand for food at a time when available farmland and water resources are reaching production limits. Agriculture is booming, and there are a variety of ways retail investors can support industry growth and enjoy the promise of steady returns.

With the country’s vast agricultural resources and a large expanse of arable land, well-distributed rainfall and warm temperature all year round, Agriculture played a progressive role in serving as the major source of livelihood to the country’s population.

In terms of employment, agriculture is by far the most important sector of Nigeria’s economy, engaging about 70% of the labor force. Agricultural holdings are generally small and scattered; farming is often of the subsistence variety, characterized by simple tools and shifting cultivation. These small farms produce about 80% of the total food. About 30.7 million hectares (76 million acres), or 33% of Nigeria’s land area, are under cultivation. Nigeria’s diverse climate, from the tropical areas of the coast to the arid zone of the north, make it possible to produce virtually all agricultural products that can be grown in the tropical and semitropical areas of the world. The economic benefits of large-scale agriculture are recognized, and the government favors the formation of cooperative societies and settlements to encourage industrial agriculture. Large-scale agriculture, however, is not common. Despite an abundant water supply, a favorable climate, and wide areas of arable land, productivity is restricted owing to low soil fertility in many areas and inefficient methods of cultivation. Agriculture contributed 32% to GDP in 2001.

Before the colonial masters arrived on Nigerian soil, our forefathers engaged primarily in farming as a major occupation and means of sustenance using crude farm implements and despite the crude implements used, enough food was produced to feed themselves and cash crops were produced and used for barter system of trade across the Sahara and the Atlantic Ocean.

The agricultural products of Nigeria can be divided into two main groups: food crops, produced for home consumption, and export products. Prior to the civil war, the country was self-sufficient in food, but imports of food increased substantially after 1973. Bread, made primarily from US wheat, replaced domestic crops as the cheapest staple food for much of the urban population. The most important food crops are yams and manioc (cassava) in the south and sorghum (Guinea corn) and millet in the north. In 1999, production of yams was 25.1 million tons (67% of world production); manioc, 33.1 million tons (highest in the world and 20% of global production); cocoyams (taro), 3.3 million tons; and sweet potatoes, 1,560,000 tons. The 1999 production estimates for major crops were as follows (in thousands of tons): sorghum, 8,443; millet, 5,457; corn, 5,777; rice, 3,399; peanuts, 2,783; palm oil, 842; sugar cane, 675; palm kernel, 565; soybeans, 405; and cotton lint, 57. Many fruits and vegetables are also grown by Nigerian farmers.

Although cocoa is the leading non-oil foreign exchange earner, growth in the sector has been slow since the abolition of the Nigerian Cocoa Board. The dominance of smallholders in the cocoa sector and the lack of farm labor due to urbanization holds back production. Nigeria has the potential to produce over 300,000 tons of cocoa beans per year, but production only amounted to 145,000 tons in 1999. Rubber is the second-largest non-oil foreign exchange earner. Despite favorable prices, production has fallen from 155,000 tons in 1991 to 90,000 tons in 1999. Low yield, aging trees, and lack of proper equipment have inhibited production.

Agricultural exports (including manufactured food and agricultural products) decreased in quantity after 1970, partly because of the discouraging effect of low world prices. In 1979, the importing of many foods was banned, including fresh milk, vegetables, roots and tubers, fruits, and poultry. The exporting of milk, sugar, flour, and hides and skins was also banned. During 1985–87, imports of wheat, corn, rice, and vegetable oil were banned as declining income from oil encouraged greater attention to the agricultural sector. In 1986, government marketing boards were closed down, and a free market in all agricultural products was established. In 2001, agricultural exports totaled $323.5 million. Exports of cocoa beans that year totaled $210.4 million; cotton lint, $21 million

Reasons why you should invest in Agriculture

Investors can make money from cash flow from crops that are harvested. Most crops are annual, but in some locations there can be multiple harvests per year. In certain cases, these yields are secured via long-term contracts with tenant farmers or from customers who agree to purchase the crops. It is also important to note that crop insurance, which protects the farmer in the event of a catastrophe, also protects the investor. This means that even if crops are destroyed or their revenue declines due to declines in commodity prices, the farmer will still receive funds with which they can pay their lease.

This is another benefit of investing in Agriculture in Nigeria as well as in other area of the world. This is applicable to those in the farming business, as lands invested in or brought for any agricultural practices which of course include farming. The lands brought for this processes does not diminish, as in the case with other item or farm tool or machinery. Overtime they add in value and continue to grow with time in value. The amount the land was gotten will definitely appreciate which will in the long run boost the investment of the investor  Residential development can also cause farmland to increase in value; if the land is located close to a residential area, the land value increases with the potential to sell the land as development encroaches.

Much like in real estate business in Nigeria, an investor can add value to their property by making improvements. In agriculture, this can include turning raw land into crops or pastureland. Also, swapping out lower end crops such as commodity or row crops to higher end crops like trees, or converting farmland from conventional farming to higher return organic farming can increase the value of the investment. Equity can also be built by improving the buildings and infrastructure on the land. These changes will increase the value of the land and can lead to larger profits when the investor decides to sell it.

There are many different ways to generate income on farmland, and many of them are unrelated to the crops being grown. If the farmland contains a large body of water, water rights can be sold or rented. For farmland that is located near a major road, there may be an opportunity to generate income from billboards placed on the land or from cell and radio towers that are built. In some cases, it may be possible to sell recreation or hunting leases on timberland or near waterways.

Investing in agriculture may not provide immediate returns, but over the long-term, it can pay off greatly. There is much less volatility in farmland and timberland than in other types of investments, meaning adding agriculture to your investment portfolio can provide continual stability with the potential for an annual income.

Examples of Agricultural Investments in Nigeria

Today farming has excellent prospects for the development. Natural conditions make it possible to cultivate almost all West African crops in Nigeria. In the forest zone with its abundant rainfall and prolonged wet season it’s better to cultivate tree crops:

And root crops such as

As well as corn and rice.

If you have enough land, you should better plant food crops such as cassava, yams, rice, millet, maize, beans, and sorghum. Nigerians use a lot of rice and cassava. These crops are hugely demanded in the country, so you must not worry about the markets. You can also do plantain, as it is quite unpretentious. Growing plantain does not require significant investments, at the same time it is quite popular in cooking. Together with traditional corps, it is very profitable to grow pineapples. They are popular all over the world and have a high market price.