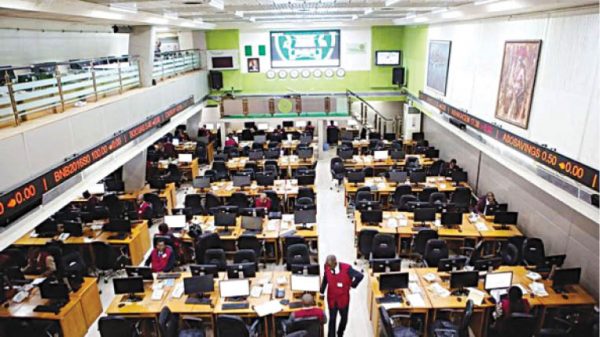 At the end of trading on Monday, Investors in the nation’s stock market lost N329bn following the commencement of an oil price war amid rising cases of coronavirus.

A report by the PUNCH stated that global stocks plunged and prices for crude oil tumbled as much as 31 per cent after Saudi Arabia launched a price war with Russia, sending investors already panicked by the coronavirus fleeing for the safety of bonds and the yen.

The All-Share Index of the Nigerian Stock Exchange dipped by 591 basis points or 2.4 per cent to close at 25,647.54 bps while the market capitalisation of equities depreciated by N329bn from N13.69tn on Friday to N13.365tn as market sentiment remained negative.

Thirty-nine companies recorded price depreciation at the close of trading on Monday while only one stock gained.

According to Reuters, European markets suffered hefty losses in early trade with London dropping more than eight per cent, Frankfurt falling more than seven per cent and Paris almost matching those losses.

The pan-regional STOXX 600 tumbled into bear market territory — a drop of more than 20 per cent from recent peaks. Oil stocks suffered massive losses with Tullow down 57 per cent and BP down 27 per cent in early trade.

In Asia, stocks and emerging market currencies with exposure to oil tumbled in volatile trade while the safe-haven yen surged.

A senior research analyst at FXTM, Mr Lukman Otunuga, said in an email sent to our correspondent that the staggering depreciation in oil prices could not have come at a more disruptive and critical time for the Nigerian economy.

He said, “Oil tumbled more than 30 per cent overnight and now sits below $34 a barrel. These levels have not been seen since early 2016. The fall comes after Saudi Arabia announced massive discounts to its official prices for April as a response to the OPEC allies failing to reach a middle ground over deeper supply cuts.

“Oil prices are on a slippery decline with more negative headlines on the coronavirus outbreak compounding downside losses. At this point in time, it is difficult to pinpoint where the floor is on oil, which has depreciated over 43 per cent since the start of 2020, and this is bad news for many emerging market energy producers, including Nigeria.”